Courtesy of FoxLA.com – A group of ministers, elected officials, and police officers from the Greater San Fernando Valley held a press conference Friday to condemn the death of George Floyd.

The press conference at the Reseda Church of Christ included Dr. Dewayne Winrow, the Senior Minister of Reseda Church of Christ, Rosalind Scarborough, the President of the SFV NAACP, Raul Claros, the Founder of the Latino Coalition of LA, US Congressman Brad Sherman, Assemblyman Jesse Gabriele, Dr. James Thomas, a professor at Cal State LA, and Jorge Rodriguez, the LAPD Valley Deputy Chief.

The group offered differing opinions at times, but are united in their expressions of anger and frustration over Floyd’s death.

“We recognize as Martin Luther King said long ago that injustice anywhere is a threat to justice everywhere. We’re here to unite our voices with those who are in social protests against this injustice that was inflicted against George Floyd,” said Winrow.

Winrow said the police department is “necessary for the protection of our rights,” but also condemned abuse of power.

“We decry abuse of power and the use of deadly force that is disproportionately used against the lives of African American men and women,” said Winrow.

“Police abuse is not just in Minneapolis. LAPD is one of the most corrupt departments in the country. Some of the vitriol that’s been placed upon the police and the department lie directly at her [Lacey] feet so it’s time for her to go,” said Thomas.

Raul Claros said he wants to work with LAPD on solutions.

“I’m here to work with LAPD so that we can be refreshed in best practices. We cannot allow ourselves to be divided and conquered by race because there’s only one race and that’s the human race,” said Claros.

The Valley Deputy Chief also weighed in during the press conference.

“We understand and we support everyone expressing their First Amendment right. We encourage our community to speak up and be heard and express the First Amendment right. We believe that it is necessary for us to work and I think we have been taking great strides to do that. We are here to ensure that hopefully it [George Floyd incident] does not happen in the San Fernando Valley.”

The group said they stand in unison in asking for justice for George Floyd. 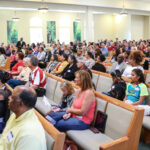